A very belated post about our holiday earlier this summer, just before the heatwave,  in north Antrim.
It was the first time in several years that we didn't go abroad and also the first time that Fudge, our three  year old Labrador, went on holidays with us. 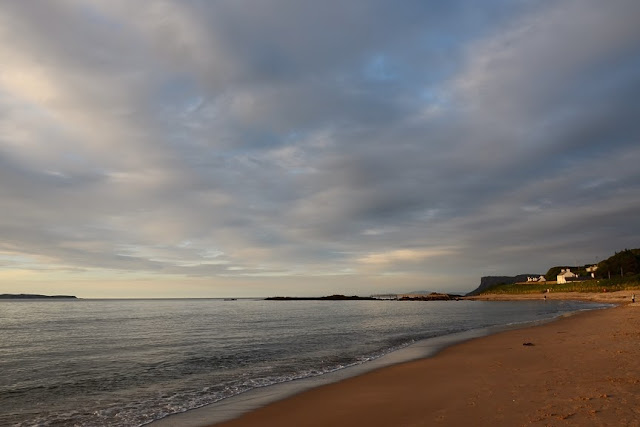 Do you have a favourite place to go? A place which never disappoints?  A place which takes your breath away and leaves you feeling refreshed? That place for us is Ballycastle, a small seaside village with a beautiful beach and stunning views to Rathlin Island and the Scottish coast. 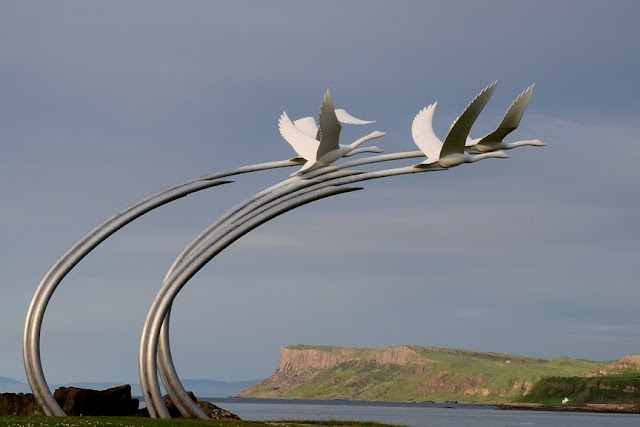 It's a place rich in history and legend, one of which, The Children of Lir, is recalled in this
elegant piece of public art. I love how the swans, Fionnuala and her brothers, appear to fly over Fair Head. 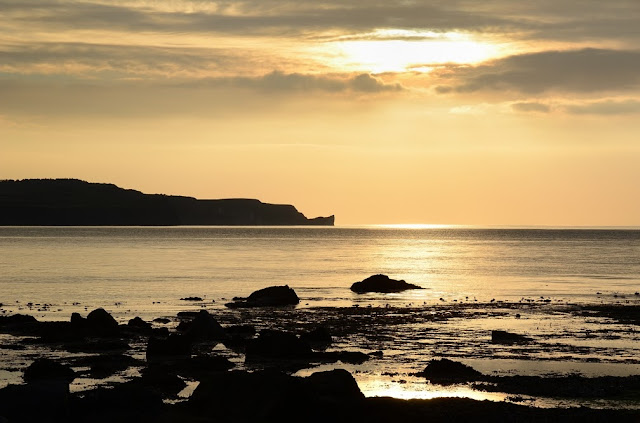 I love walking along the strand, catching glimpses of Rathlin Island or looking back at the stunning Antrim coast. 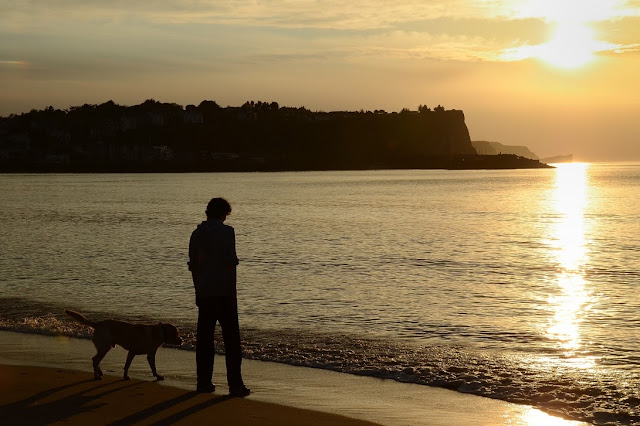 Away from the seafront, the village is quite charming and manages to cater for tourists without losing its character. 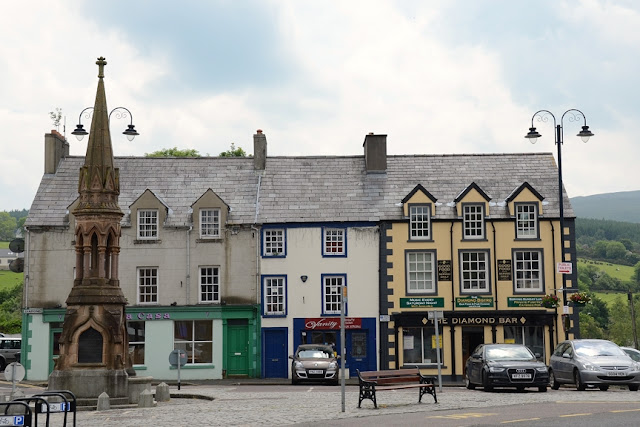 We travelled over the Rathlin Island for the first time this year - and thanks to Fudge we got talking to lots of other passengers on the ferry. Aren't dogs just the best conversation openers? 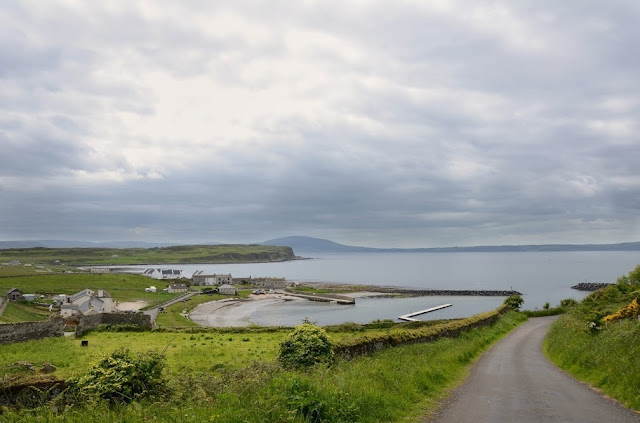 The only inhabited island off the coast of Northern Ireland, Rathlin has a small community of around 100 people which increases during the summer season. 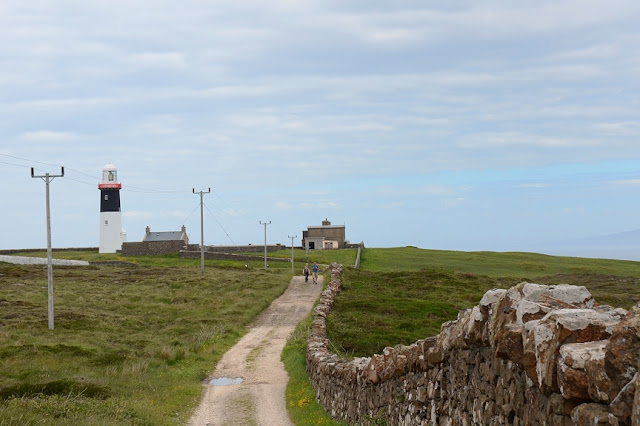 The island has three lighthouses. It was near to this one, the East Lighthouse, that Marconi sent his first telegraph messages. 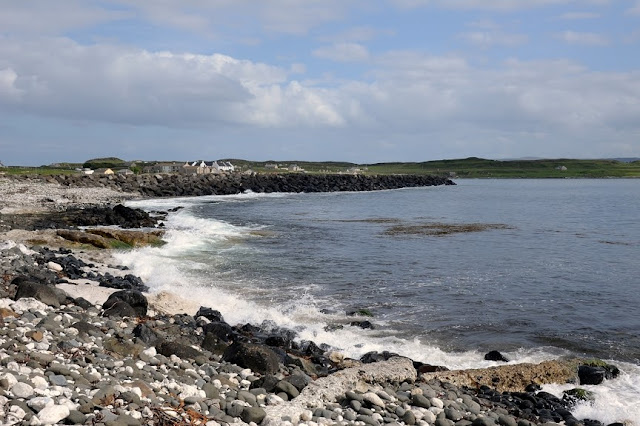 The dramatic coastline is home to thousands of seabirds, including puffins, and a colony of seals.
We had lunch at McCuaig's Bar, the island's only pub, and I had the tastiest panini outside of Italy!
We then walked around the bay to see the seals. 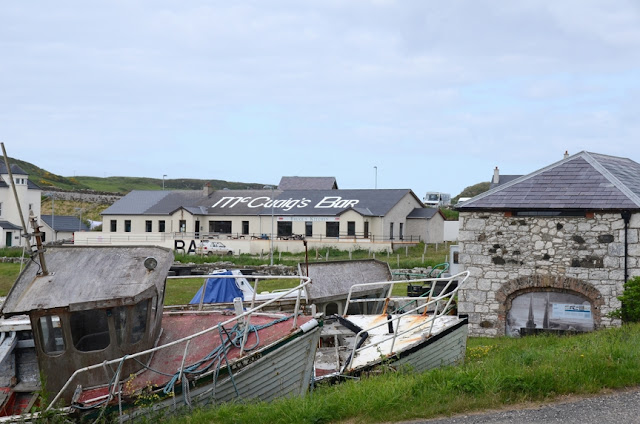 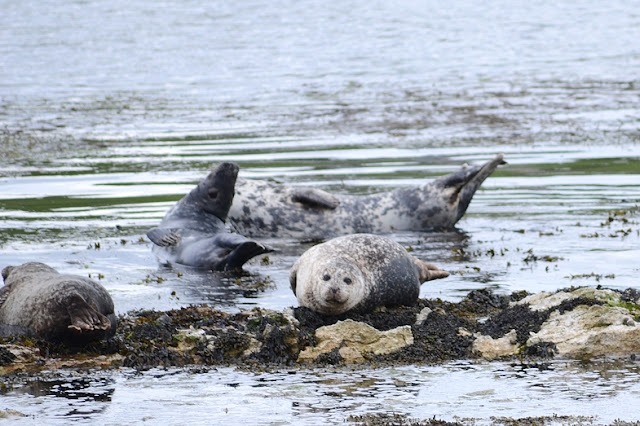 The old Manor House is now run by the National Trust and serves as accommodation for visitors. While we didn't stay overnight on the island, we enjoyed a cup of tea on the lawn outside the house. 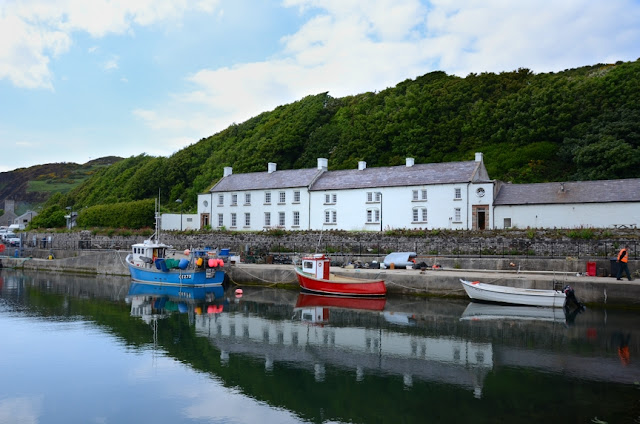 Although the north Antrim coast is most famous for the Giant's Causeway, we've seen it so many times that we decided to give it a miss. Instead we visited the ruins of Dunluce Castle, where, according to legend, the kitchen, cooks, pots and pans, went crashing into the sea during a terrible storm. 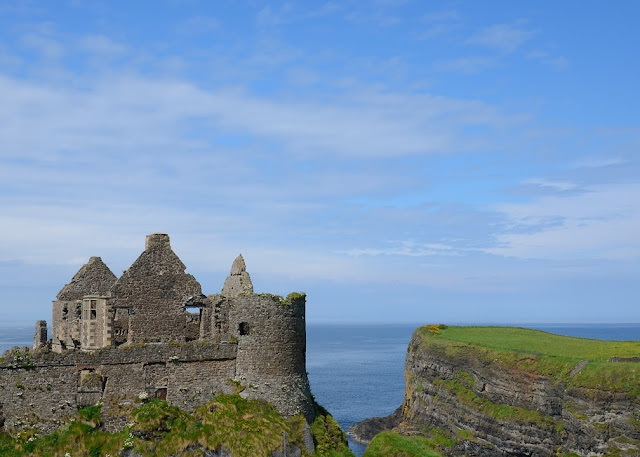 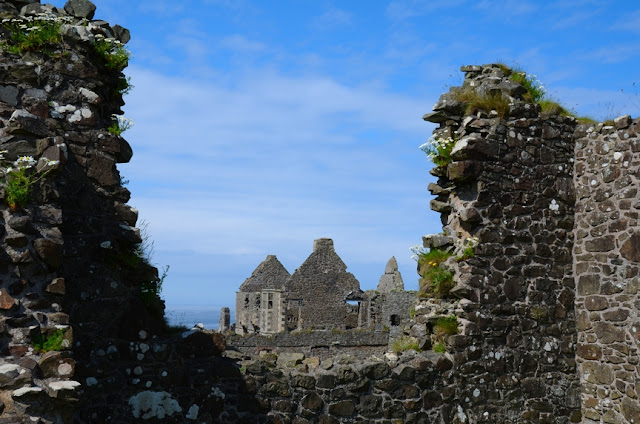 We stopped off and enjoyed the tranquility of the tiny Ballintoy Harbour. 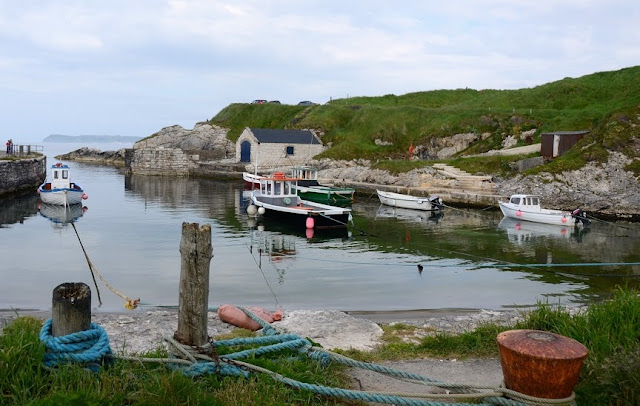 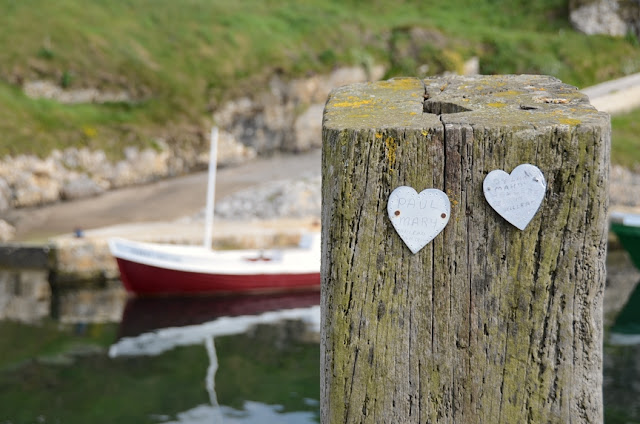 We walked along the magnificent White Park Bay, marvelling at the crashing waves, so big compared to  the ones that lap our secluded coast. 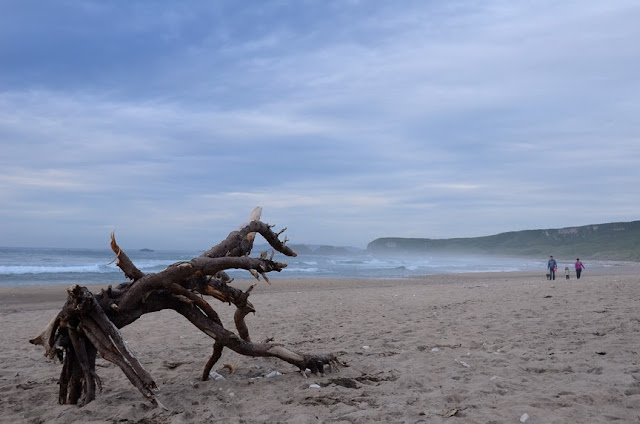 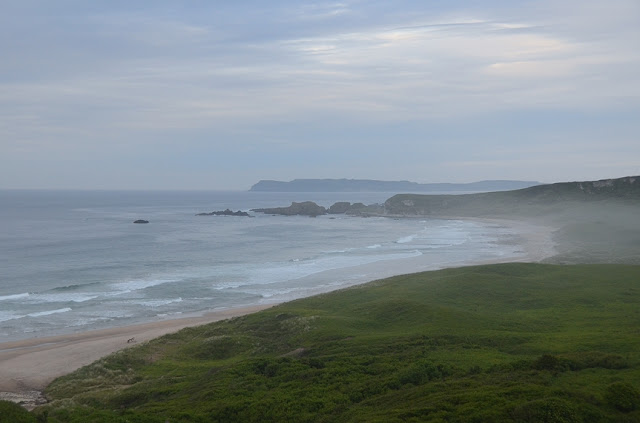 We drove down the coast to the pretty village of Cushendun and clamoured down to its 'Pudding Stone' caves. 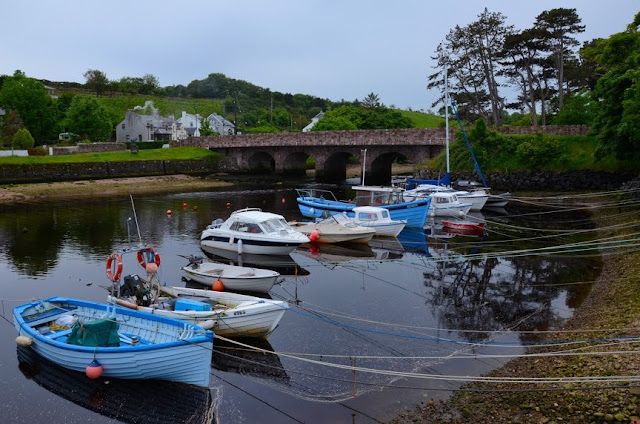 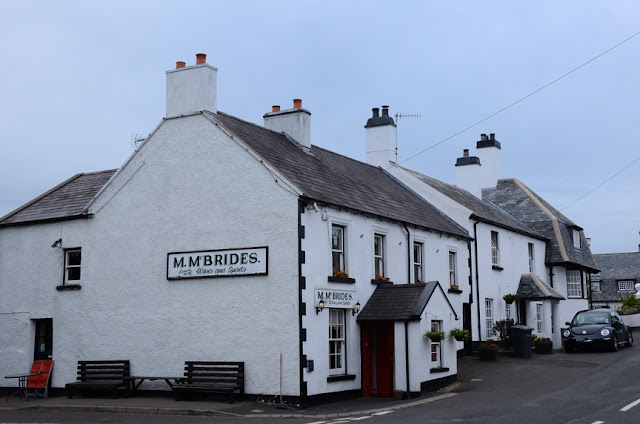 Gaelic culture is alive and well in Cushendall in the heart of The Glens with its old watch tower. 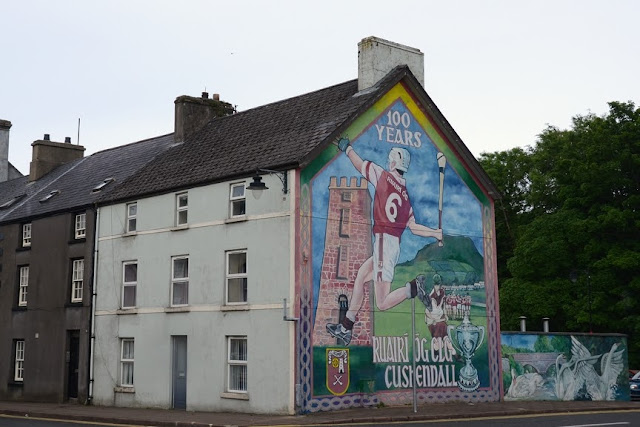 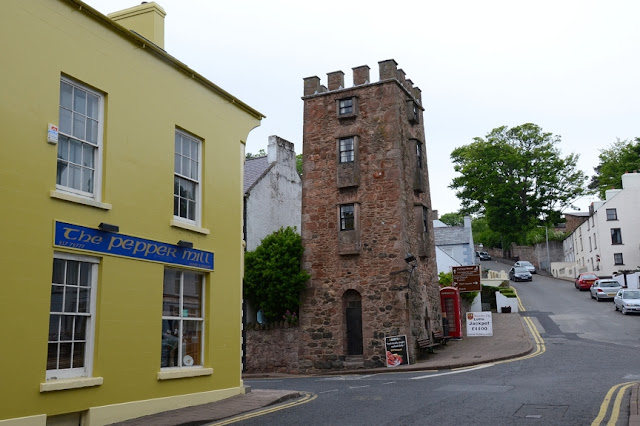 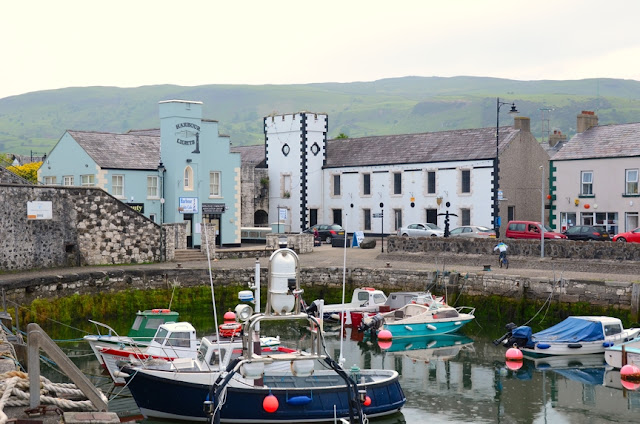 At the end of each day's exploring, we were glad to go back to the delightful cottage we had rented and Fudge made himself at home in front of the fire. 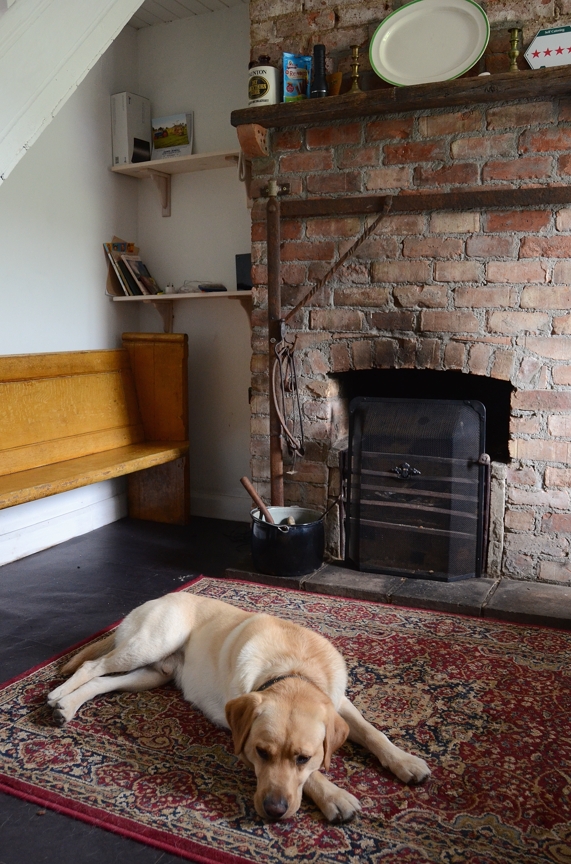